A day in the life at Camp Qwanoes

I'm sure that people wonder sometimes about what life is like living here at Camp Qwanoes.  As you can tell from previous posts they spend a lot of time in class, studying for class, writing papers for class, reading books to write papers on for class. However, that's not all that goes on here.  The students live in Pacific Woods Lodge and between the hard work, the studying, being involved in ministry and going on adventures there is an amazing community that lives and thrives in that building.

Whether it's a group study session or a game of Dutch Blitz there is a lot of life lived under that roof.  Guy/Girl Bible studies are a regular part of the routine as are Chapel times and the occasional large-group hockey game or movie night.  Early in the morning there are people tucked away in corners doing their daily devotions and as the dark envelopes Pacific Woods Lodge board games and Foosball are common sources of entertainment.  If the weather cooperates a football or frisbee can often be seen flying back and forth across the main field.

Sometimes we have building-wide Nerf wars. 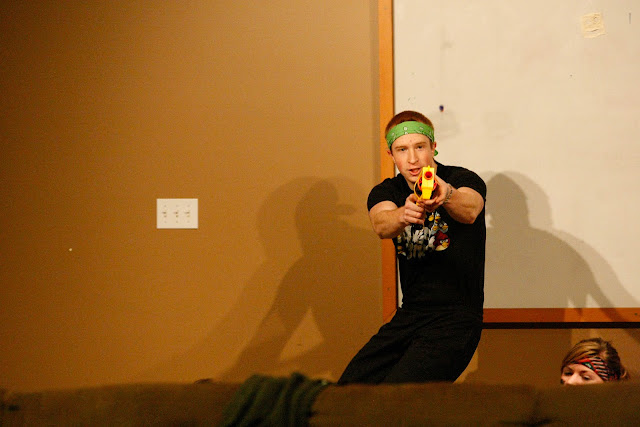 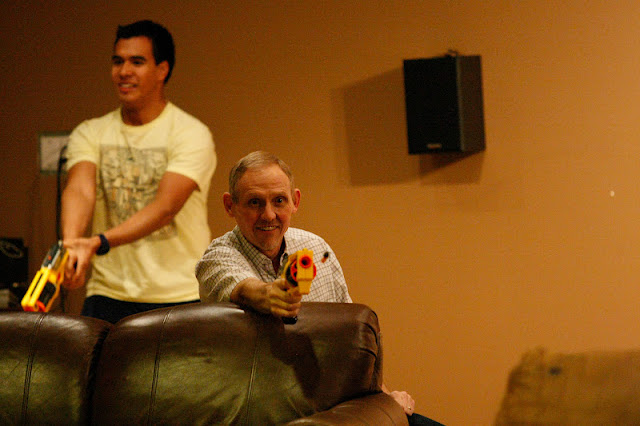 Pictured above is Tim Stabell, the professor who was teaching the Theology of Missions course last week.  He joined us as we turned the classroom into a battlefield, using couches as barriers and stairwells as tactical positions.  It was an amazing opportunity to be in community together in a fun way that's out of the norm.  Where else will your professor hunt you down with his Nerf-ninja skills between classes? 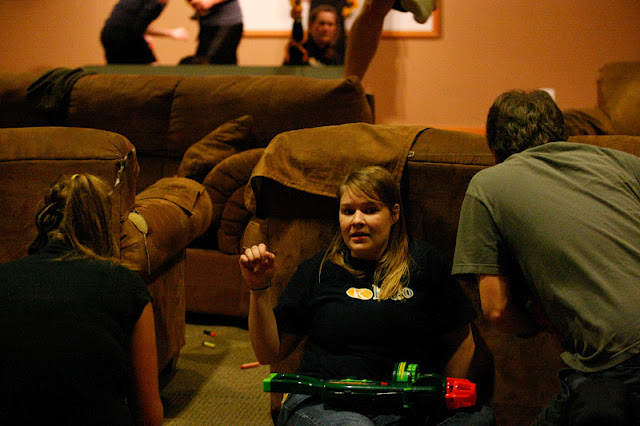 Here you can see Erin using her military hand-signals to direct Scott Bayley, Executive Director of Camp Qwanoes (on the right), on where to attack next. 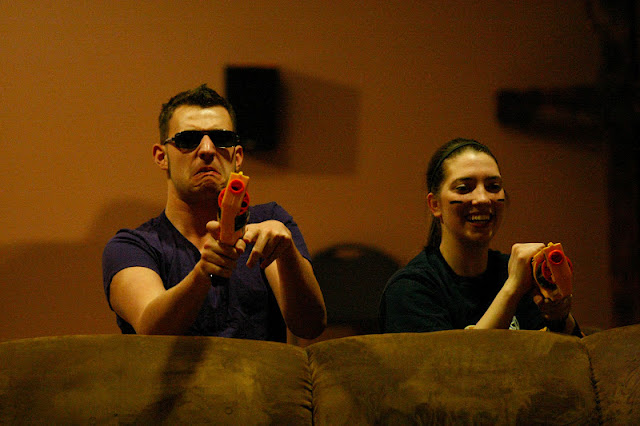 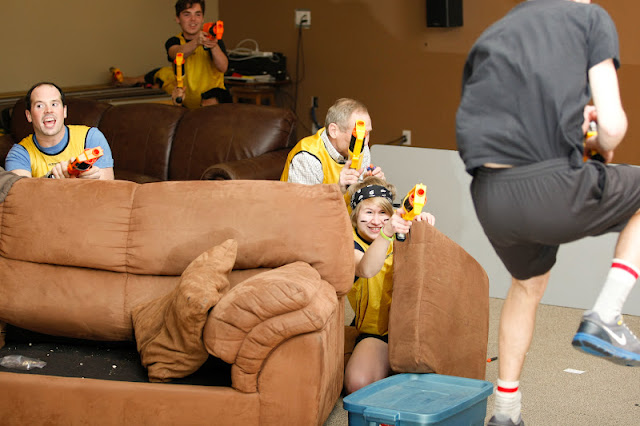 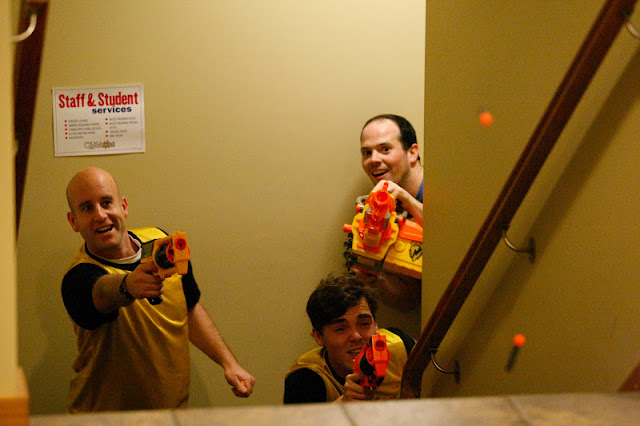 Here the Assistant Director Jay Kennedy (left) and Kaleo Leader Andrew MacDonald (top right) are trying to make headway but are fighting a loosing battle against the opposing team (pictured below). 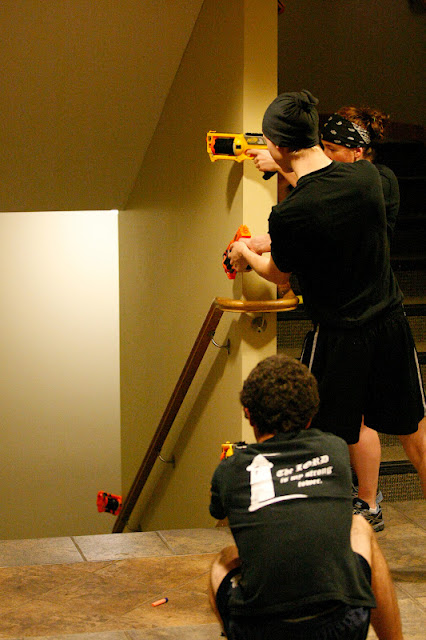 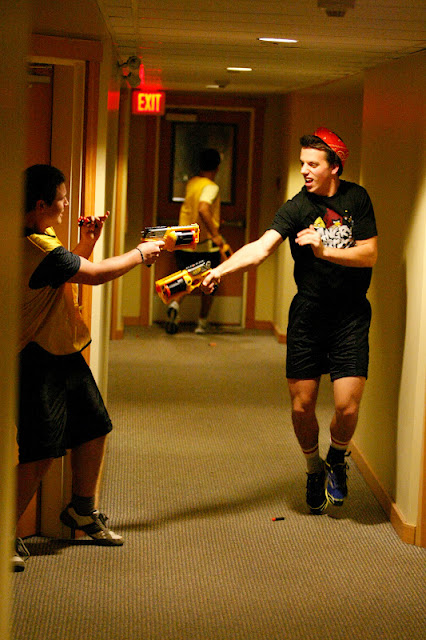 It was incredible to see the hallways that serve to bring students from their rooms to the rest of the building being used as cover to suppress enemy forces! 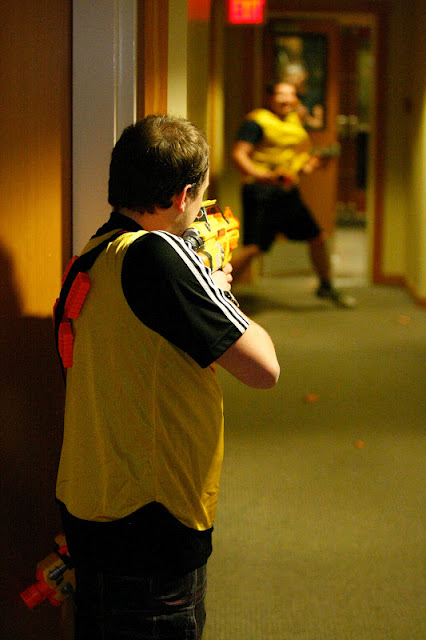 Many different staff joined us for the evening including Matthew Poore who brought his own arsenal of automatic Nerf Guns.  Even though he had the fire-power, he couldn't stand up to a head on assault from Nancy and Nicole! 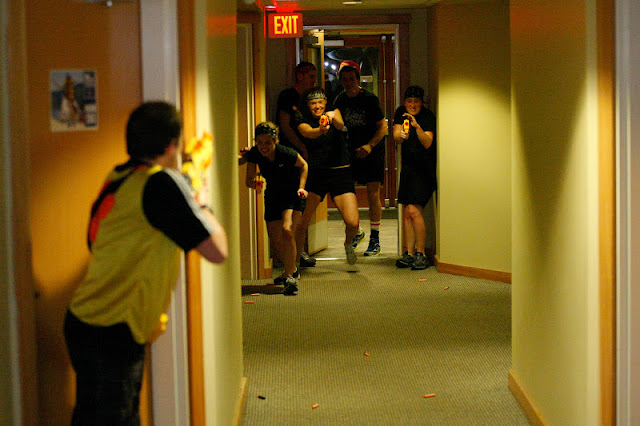 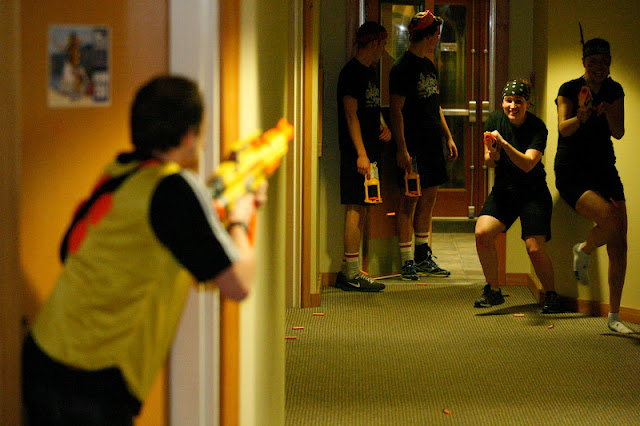 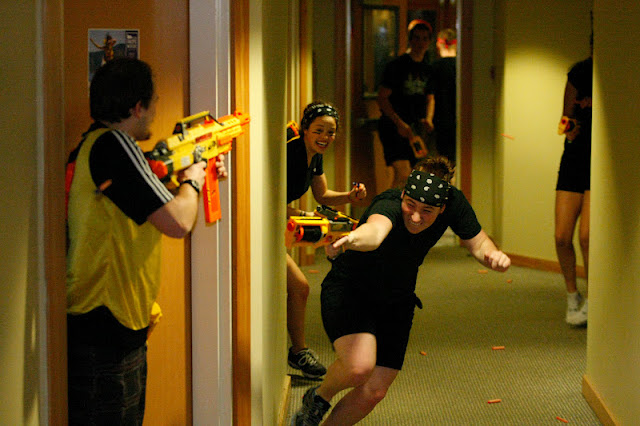 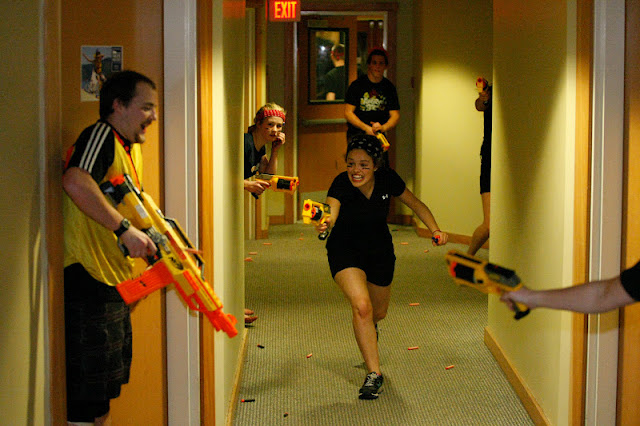 Throughout the night we kept mixing up the teams, changing whether it was capture-the-flag or defend-the-castle and the strategies kept changing with it.  The students had a blast thinking up creative ways to complete their missions and come out alive. 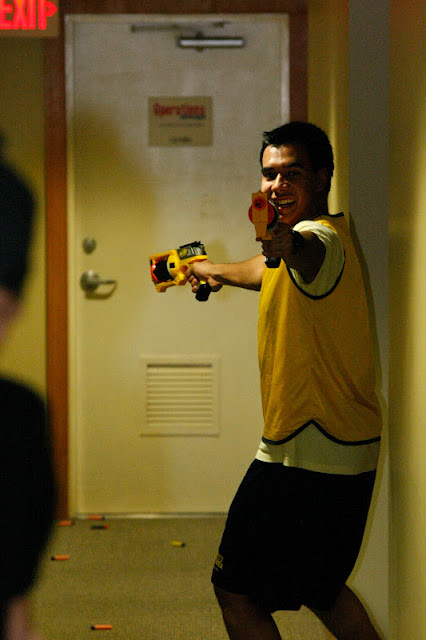 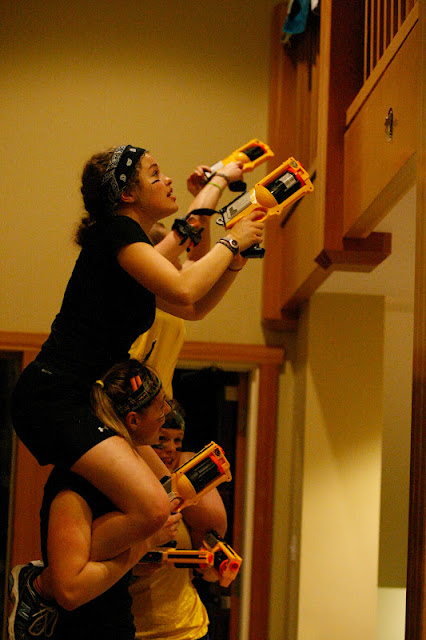 Nicole and Erin can be seen trying to use teamwork to storm the castle. 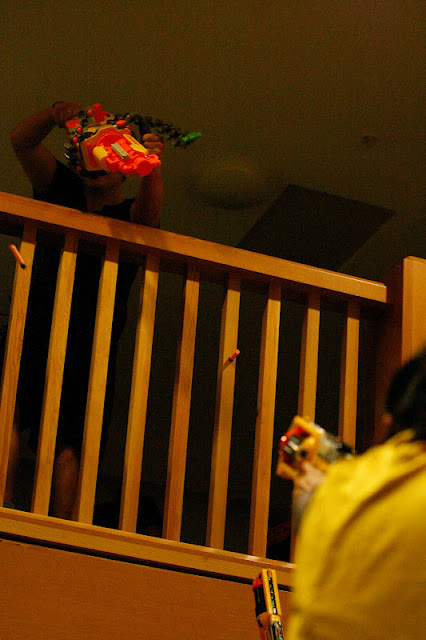 But the castle had the automatic Nerf guns. 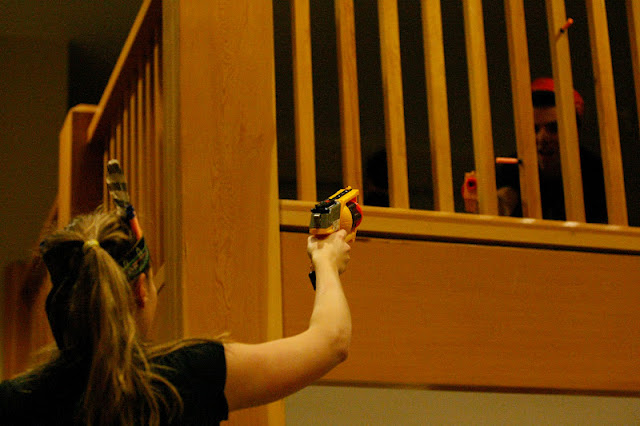 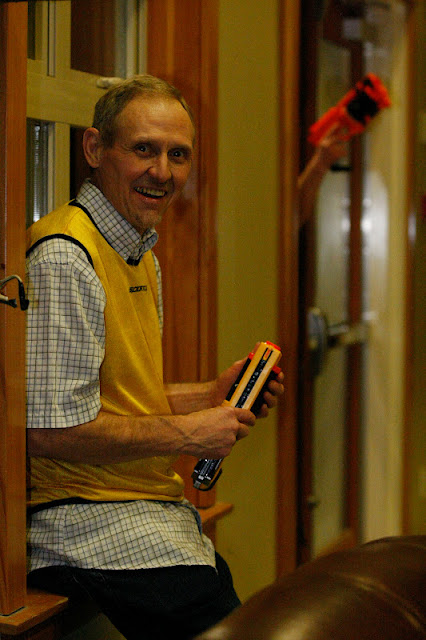 Theologian by day and military strategist by night, the students couldn't stop talking about how much they loved having Tim Stabell fighting alongside them all evening.  To these students they're not just "that prof I had once" but they are people who did life and walked alongside them for a week both academically and in the ridiculousness of life. 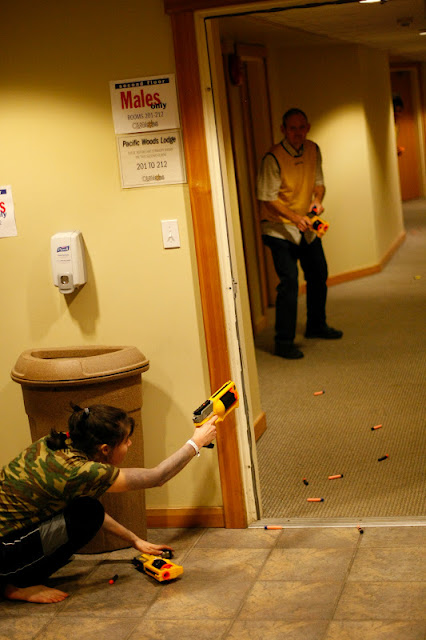 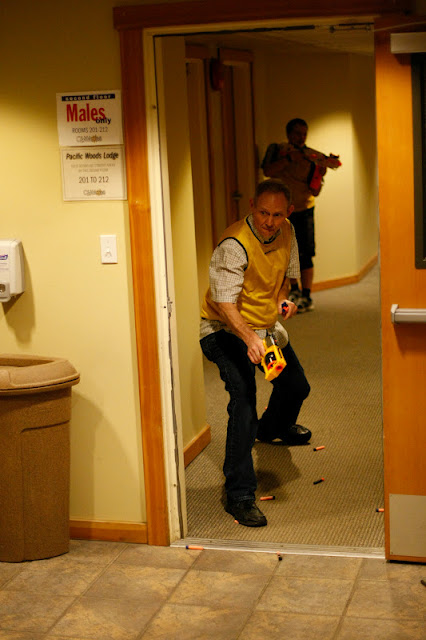 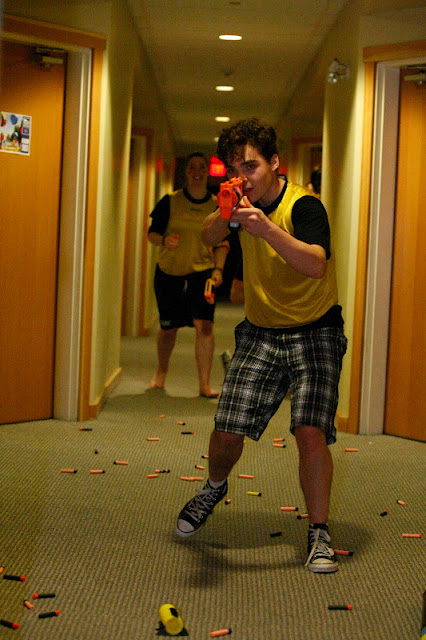 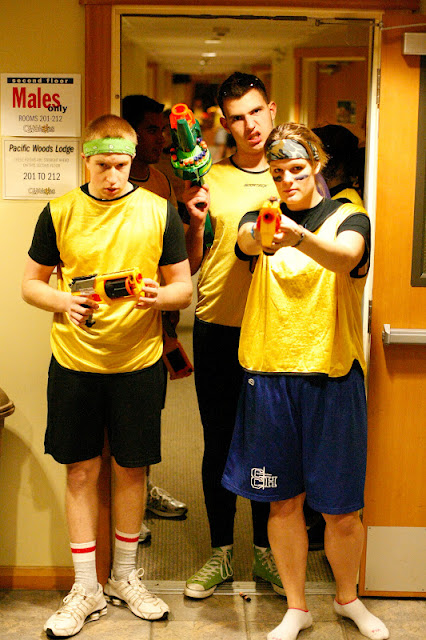 All in all it was a night that our students will never forget.  Shared experience is something that helps forge bonds that will last for a long time to come and something as memorable as this Nerf war will surely do just that.  Community in the Kaleo Program isn't just Bible studies and football games but sometimes it journeys into the realm of the fantastical and the unforgettable.
And as for all of the campers who attend the camp Nancy directs back home: watch out.  She's been getting ideas.
Posted by VK at 2:04 PM